The blackbirds have nested again in our hedge just outside our kitchen, we saw 3 eggs in the nest, & low & behold the magpies have had the eggs again. A friend in a flat on the other side of the building overlooking where i filmed the 5 foxes a few years ago saw at least 5 last week, some obviously being youngsters. We have seen odd ones about  in our grounds, but we haven't seen them where their den was until last week. It was in the afternoon when they were seen.
I also put a bird box on the fence, & pleased to say blue tits are in and out of it, so something's going on.
Posted by davesax at 13:26

Fox on the prowl 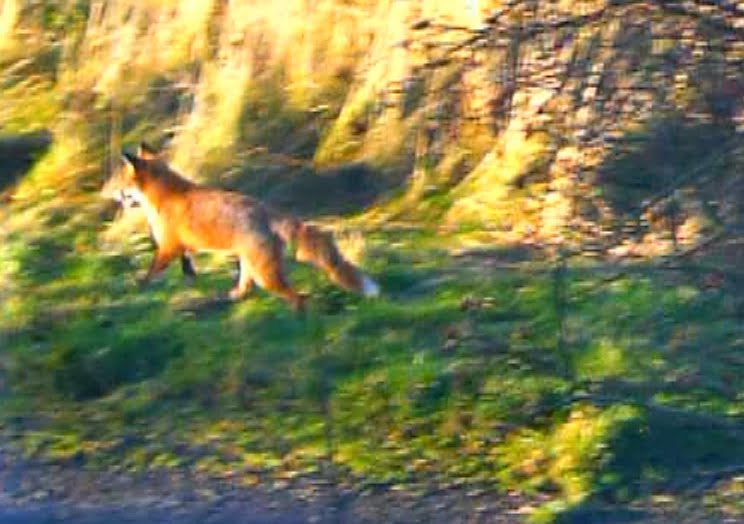 This was taken on a sunny january morning at 10am in Gateshead, where earlier the same day, a fox with another either a vixen or a young one, snarled at someone near our front entrance,

Came by this photo of one of my favourite cars of all time, the Wolseley 6/90 the other day which takes me back to when i worked at Rolls Royce at Barnoldswick, the Wellfield factory in about 1966. I had a Wolseley 15/60 farina model, but the engine blew up, & this guy who had a small backstreet garage across from the factory put a 1500cc engine out of an A55 in, but it just wouldn't pull so i popped across to see him. As i was looking around he asked me if i fancied this car, a grey 6/90 with a straight 6 2639.4cc engine. He wanted £38 for it so i bought it. The photo is from the original handbook from the car, pity i haven't got the car to go with it! It was an absolute cracker to drive, with a tiny gear leaver at the r/h side as the front seat was a large bench seat right across, an overdrive lever and handbrake coming from under the dash. The body shell was very thick, you couldn't dent the wing, they were solid, really well made. When i was down London doing a bit of recording, i picked up a black 6/90 with an Austin healy 3ltre engine in it but the diff didn't match, so it sounded beautiful but it did not have the power.