Been playing around with some phone lenses so here are a couple taken with the Lieqi 180 degree fish eye lens which gives another take on how you see  the world, in fact i quite like it. 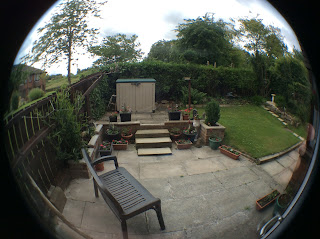 and here is another shot 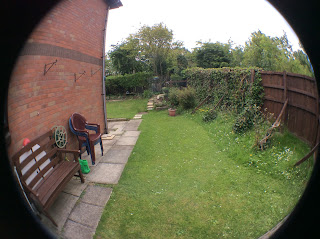 Stay at home protect the Nhs

Hope you are all keeping safe,unlike D. Cummings, I voted for Brexit but Cummings's actions were wrong & he must either resign or be sacked.
Posted by davesax at 02:22
Labels: news international 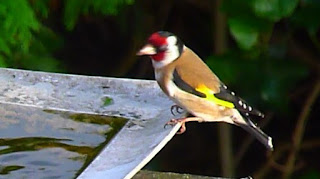 look what landed on our bird bath the other day, a beautiful Goldfinch, what a colourful bird, makes a nice change from the wood pigeons, crows, jackdaws, magpies, robins, & others. i'm now leaving camera running to see what other varieties we can see. we had seen a couple of very colourful birds but couldn't just make out what they were, but now i'm on the case.
Posted by davesax at 04:55

please note photos on here prior to 2019 were hosted on tinypic.com, which has ceased trading, so I will repost them asap, thanks in advance, dave.
Posted by davesax at 12:20

sorry to hear the sad news of the passing of Ronan O'Rahilly the creator of radio caroline. He started a pop radio revolution making millions happy & to my mind pop radio has never been the same since, thanks for the wonderful memories.

I know we had to retune all the time as it kept fading out, but that was part of the experience to me, dab radio didn't exist then, cassette recorders were only just being invented. I'll add a few more memories later.

we've been in lockdown in the uk now for approx 6 weeks, so I have uploaded my 10 penny worth onto youtube. I play saxes so I  did my rendition of Vera Lynn's We'll meet again, so if you would like to view & leave a comment,  like or subscribe it would be great.
you tube link:---we'll meet again
will now update this site on a regular basis so if you've landed on here somehow, hope to see you again or on my youtube channel, thanks in advance.

The dc vlog :-- music,  me on saxes & vocals, r/control cars & trucks, film about a beautiful sheltered accommodation scheme, take a look & enjoy, just click under my skin in the useful links

Heard the song “the lion sleeps tonight” on tv other day & it  took me back to the year of 1961 when the original came out by the Tokens.
I remember it well, I was about 16 living in Burnley with my parents, & usually I was first up & would immediately put the radio on as I was well into music then, as I’d started playing sax at 9years old, & as there were no pirate radio stations then or radio1, I always listened to the German (or Danish) version of radio Luxembourg which played all the latest pop, the English radio lux was of course transmitting in the evenings.
I remember it was winter & whilst I had a portable electric fire on, if I had time I would light the coal fire with a ‘blower’ a piece of metal with a handle.on it over which you placed a large sheet  of newspaper to force the draft up the chimney to get the fire roaring, which sometimes catches on fire sending smoke in the living room. & sparks shooting out of the chimney, ah what memories, no health & safety in those days!!!
That was before portable radios, tape decks & whatever were invented, in fact I don’t think we had a fridge then either, because I recollect going to a girlfriends house where her mum gave me some crumbly cheese out of their fridge, I loved it & consequently told my mum when I got home, begging for us to get one. We did have a square black & white tv though.
Well there you go, all that info from just hearing a song on a tv add.
This particular song seems to have cropped up in my life a few times as in the post below from 2010, regarding radio Luxembourg.


At last I'm up & running again, well what a mild winter, or should i say an extended autumn, bulbs are showing through, buds shooting out here & there, cyclemen looking its usual best at this time of year, glad i haven't still got the pond, or the frogs would be going berserk now, & then when or if we do get some cold , probably at easter the frogspawn would be knackered.

It's now end of May & low temp to last until next weekend. Bedding plants read to go in outside but dare not risk. Saw 23 degrees on bbc weather app for next Tuesday, now revised to 19, but still much better than this!! Heatwave on its way--- yes?
Posted by davesax at 08:58
Location: Gateshead, United Kingdom 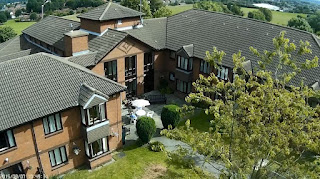 First aerial pic of our place using syma x8  quadcopter with a Mobius cam. This still taken off video as the x8 cannot lift a gimbal safely for more than a couple of minutes, hence the footage follows every wobble the craft makes.

The blackbirds have nested again in our hedge just outside our kitchen, we saw 3 eggs in the nest, & low & behold the magpies have had the eggs again. A friend in a flat on the other side of the building overlooking where i filmed the 5 foxes a few years ago saw at least 5 last week, some obviously being youngsters. We have seen odd ones about  in our grounds, but we haven't seen them where their den was until last week. It was in the afternoon when they were seen.
I also put a bird box on the fence, & pleased to say blue tits are in and out of it, so something's going on.
Posted by davesax at 13:26

Congratulations to radio Caroline on its 50th anniversary. I was a teenager growing up with the pirates in the sixties, the Beatles etc and feel very privileged to have witnessed a musical revolution that will never happen again, a wonderful era.
There's a link to Radio  Caroline on this page, you can also find all the fabulous jingles which the pirates were famous for.

just using this blog page from now on, but there are still links to pond info etc. I was planting some daffodil bulbs in our raised bed last week, but as i knew the foxes had made a hole & there had been ants nearby, i used my spade to prepare a hole for the bulbs. So glad i did as the fox had buried a chicken there.I've now put a few more sticks in to try & deter them, but now the cats have decided to have a go at rearranging everything, i give up!!
Posted by davesax at 13:45

Don't forget to view my Youtube channel, which has a few videos of interest, by clicking https://youtu.be/BbRQ8ZMD_44  or go to under my skin in the useful links
Posted by davesax at 14:37

I have an itouch 1st generation which will not upgrade passed os 3.1.3 version. I have always used it to watch odd things via iplayer on it in bed, it was so handy, but a week or so ago iplayer stopped working on the itouch, i couldn't believe it. Whether Apple tried to make us upgrade to a later model or what, it didn't work as i have a xoom which i could use. But my itouch is just perfect for what i use it for, either catching up with iplayer, not long programs but for example if i missed a house on homes under the hammer or something & the phone went, i can always see it on my itouch later. I googled the stoppage & other people were up in arms as well as me, but hey!!, it's working again, so thankyou Apple, or BBC or whoever  messed with it. I do of course also use it for music , videos & photos, it's a brilliant piece of kit, only thing it has no speakers, but i don't need any as i have other equipment if i require speakers, the ear pods are fine, otherwise i wake the wife up!!! Update, as of november 2013 iplayer is off the early models.
Posted by davesax at 13:06
Labels: apple, iplayer, itouch

Well we're into December now & my garden certainly does not look like it's nearly Christmas, the bush lobelia has come into bloom again, the blackbirds seem to be looking around  near to their old nest, bulbs are coming through, i've only just brought the geraniums in, & they were all sprowting new flowers, wow!!
This time last year i think it was slightly different, & very white, but we have had some very strong winds, & more of the same in the coming week i hear. Wonder if we'll get a white Christmas??
Posted by davesax at 08:37
Labels: bulbs, weather, white Christmas

I was also due for a new laptop, but i was looking for one with dedicated graphics, as i like a bit of gaming, but a machine with graphics suitable for gaming one normaly has to pay from £650 upwards.
Whilst looking at Pcworld i found a Samsung RC520-SO2 with 6gb memory, 750 gb hdd, cpu  Intel core i5, and a Nvidia GT  520M graphics card. all for £589 and guess what, i recieved £50 cashback off Samsung with a student offer, so i am very happy with it.
On my desktop i was getting 20 odd fps while on this laptop i'm getting 47 fps sometimes. I,ve had this laptop for about 3months and i really like it, it's fast, responsive, the screen is ok, the sound is better than other laptops i have heard, apart from the xps with jbl's, obviously. It is also quite sturdily built and the keyboard seems ok, and the webcam is good for skype video, so all in all this is definitetly one to look at.
Posted by davesax at 12:21

At last got time to post something , i am writlng this on my Moto Xoom wi fi, & if anyone reading this is thinking of a tablet, then i recomend the wi fi version of the Xoom. It is absolutely awesome, i've had mine for about six months now, & i still haven't found anything i  don't like about it.
I was thinking of an ipad, as i have a 1st gen itouch, the one with no speakers, but i love my itouch, i watch iplayer on it when i get in bed with the ear plugs, & it's wi fi so i get my emails on it, but the Xoom is 10" so it's a lot easier to reply, surf , etc on. I was looking at a 7"  tablet, but i am really glad i went for a 10" version.
Also  glad i got this instead of the Ipad, because apple doesn't have flash & you are tied to itunes. To put photos on my Itouch i have to first  put them into my folder in itunes, but to get them on to my xoom i can connect to computer & drag them over or just bluetooth them over from my phone, plus the cameras are ok. I am just awaiting video for skype then i will be 100℅ happy.
Any questions just contact me & i'll be happy to help.
Posted by davesax at 11:38
Newer Posts Older Posts Home
Subscribe to: Posts (Atom)